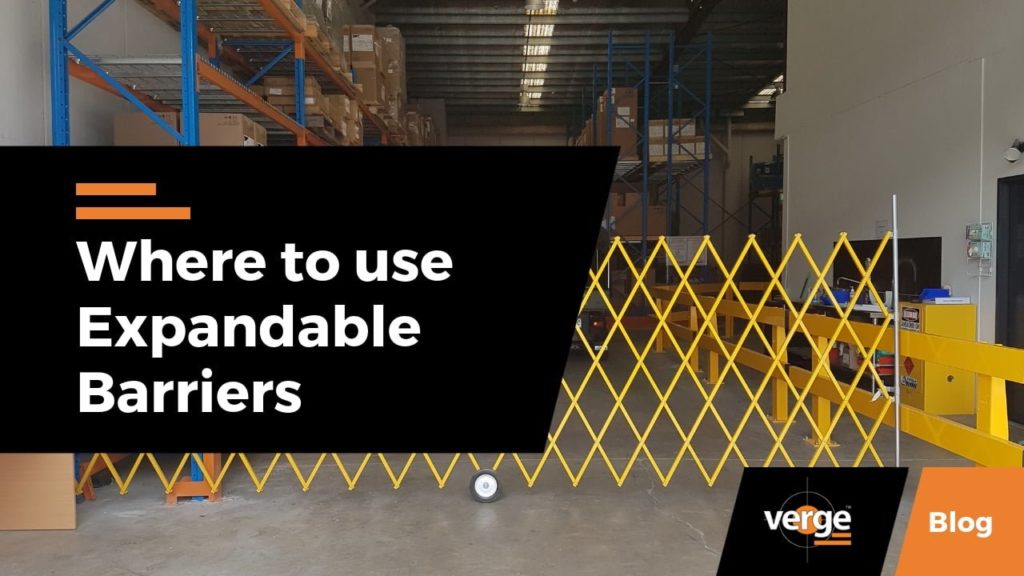 If you go to concerts or big sporting matches, then you’ve most probably seen a barrier for crowd control. Note, however, that this heavy cold-looking steel object is not the only type of barrier there is.

An increasing number of establishments now use expandable barriers in their operations. Aside from their flexibility, they are generally lighter compared to their steel counterparts making them more useful for a variety of purposes. Verge’s standard expandable barriers weight between 6 and 9.6 kilograms, much lighter than the 22 kilograms of standard crowd control steel barriers. Expandable barriers are also versatile as they come in different variants for different applications.

6 areas where you can use expandable barriers

Like steel crowd control barriers, expandable barriers can be used to restrict people’s access to a building’s maintenance zones. Common uses of expandable barriers in commercial and retail environments include restricting access to elevators and escalators, when being repaired. The standard 3-metre expandable barrier is ideal for this use. This type of barrier is also used to block public passage or indicate denial of entry into unauthorised areas for security and safety reasons.

A light plastic temporary barrier is ideal for blocking any narrow passages, such as access ways to toilets. Measuring only 2.5 metres, the 3-metre’s little brother is just enough to cover small pathways. You can even use it to block individual stalls or doorways.

For wider areas, meanwhile, there’s the 5-metre standard variant. This is perfect for blocking access on the major walkways of shopping centres and other large commercial buildings. Large stadiums, which also have wide passageways designed to handle large crowds, use the 5-metre variant in order to block fans with tickets to one section from crossing into another.

Other types of expandable barriers available in Verge’s range are the 4-metre GV503, the 5-metre GV504, and the 8-metre GV505. While these can be used for simple access blockage jobs, they are also useful for specific operational needs.

b) Formation of lines and divisions

The point of having barriers is not to restrict access just for the sake of it, but for order and safety. As with other kinds of barriers, expandable ones can be used so people can form lines, especially in places with high foot traffic.

Dining establishments, most especially food courts or cafeterias, commonly use the 3-metre standard expandable barrier. This way, owners are easily able to distinguish who is lining up and waiting for their orders to be taken at their counters and who is not.

Shopping centre and sporting arena operators also use expandable barriers, particularly the 5-metre variant, to have people fall in line prior to entering its premises. The barriers, of course, must be placed on even surfaces. Using a long barrier is most appropriate at points where operators want to tighten security, since it forces patrons to go in a single file. This gives security personnel additional time to look at the faces and moves of those who come in.

Standard variants can also be used to divide audiences getting in line to buy their tickets for movies, concerts, and sporting events. Divisions can particularly be made according the seating section of the ticket they’re purchasing.

What’s good about expandable barriers for operators of large establishments is that they don’t have to leave these outside the premises after operation hours. They can easily collapse the barriers and put them in a storage facility. When it’s time to use them again, the barriers can be brought out easily with their light weight. They can then be expanded and used again.

Expandable barriers are useful in the workplace. As with commercial and retail establishments, standard variants can be deployed to block access to common areas undergoing maintenance work like elevators and escalators. They are also used for creating lines, specifically when entering the building’s premises for security purposes and in front of food outlets to avoid chaos when orders are being taken.

Offices with large lobby areas also utilise expandable barriers. Four units of either the standard 3-metre variant or the light 2.5-metre variant can be placed end to end to encircle the open area being blocked off. In many cases, these are either wet areas or damaged flooring sections and barriers are used to isolate hazards in areas with high foot traffic, such as lobbies.

Children, especially those in pre-school levels, tend to be full of energy and just run into anything they see. School floors need constant cleaning and mopping and the 2.5 and 3-metre variants are ideal to block off wet areas.

Since kids are involved, it’s recommended that extra signage indicating hazard or caution be placed by the barrier. No one wants them to sustain injuries in a place that cares for them.

Large facilities like warehouses – not usually accessible to the public – store items that may be bulky, fragile, or need special handling. While you have personnel you trust with these items, you as a business owner have to make it clear that not everyone working for you should be in all areas. Industrial expandable barriers are a great way to send that message loud and clear without shouting or risking losing your voice.

Verge’s industrial expandable banners span from 4 to 8 metres. They are made from aluminium so they are up to the heavy task they have to perform. Industrial variants also measure up to a towering 1.7 metres (approximately 5.5 feet) amplifying the message of access restriction or denial.

Industrial barriers are also relatively easy to secure, as they are difficult to rob because of their weight. The GV503 4-metre and GV504 5-metre variants weigh 16 kilograms each, while the GV505 8-metre variant weighs 28 kilos.

Industrial variants are also used by big box stores as they are designed like typical storage warehouses. But these stores need sturdy industrial barriers as they are accessed by the public and not just trained staff. Larger barriers are meant to protect customers from harm, specifically from supplies stored on high shelves during inventory. The imposing look of the barrier certainly signals to customers that they should keep away from aisles where stocktaking and other activities are happening during store hours.

To seal off affected sections of big box stores, industrial barriers (GV503, GV504, or GV505) can simply be placed at the end of the aisle. Specifically, both ends of the barrier can be positioned right by the ends of the crates that form the aisle. If you have purchased the GV504 or the GV505, these have lockable castors that help keep the barrier from sudden movements.

In addition, the GV504 has a support wheel in the middle. The GV505, meanwhile, has 3 support wheels, one in between each barrier’s ends. The wheels are also proportionally distanced from each other and the barrier’s edges.

Our industrial barriers will help you establish order and safety if used as part of a traffic management scheme inside your warehouse.

It’s important that industrial barriers, especially those placed in large facilities like warehouses and big box stores, be clearly seen. Aside from their imposing look, Verge has made sure of this by making the barriers available in yellow and black – contrasting colours that when painted together on a single object make it easily visible.

Barriers are not typically used inside the house itself, but this doesn’t mean they don’t have uses in residential settings. Especially if you have a large backyard area.

You may want to look into how the 2.5 or 3-metre barrier would suit your needs, especially when holding parties or large gatherings. Use it to indicate hazard areas in your backyard to discourage guests from going near them. If you’re quite particular about orderliness, consider placing it by the buffet table so your guests fall in line and things don’t get chaotic.

2. Roads, sidewalks, and other public works

Expandable barriers are also great for use in public spaces to address safety concerns. A set of either 3 or 4 standard variants (2.5 or 3-metre), for instance, can be placed around an open manhole on a road to prevent motorists from running into it and damaging their vehicles. These can likewise be used to surround open manholes on sidewalks to guard the walking public from falling into these pits.

Open manholes are a potential cause of vehicular and pedestrian accidents. No one wants to add to the 480 deaths due to vehicular mishaps already listed for 2018.

Expandable barriers can also be used to control traffic to direct motorists and pedestrians to designated areas. During special events, standard variants – most especially the 5-metre GV502 – can help in vehicular traffic rerouting schemes.

The same variant is also useful for marathons and fun runs, either to block off onlookers and bystanders from the actual running area or to segregate finishers of different categories. And since these are lightweight and collapsible, organisers can easily set these up prior to the event and store them with less burden afterwards.

Securing your property and ensuring the safety of your customers and visitors is of paramount importance to you as a business owner, homeowner, or event organiser. We at Verge see eye-to-eye with your needs.

Expandable barriers are useful in many cases, especially in blocking entry to unsafe and unauthorised areas. This way, your property is secure from any undesirable entry and your visitors are given peace of mind.

These flexible barriers also help control the flow of both vehicles and pedestrians, especially during rerouting in areas with dense populations.

Expandable barriers can also be used to make people fall in line, whether to enter a commercial establishment (like a big shopping centre) or huge entertainment venues (such as sporting arenas and concert halls). These can also be utilised so people line up when ordering meals at food stalls or buying tickets for movies, concerts, and sporting events.

This is why Verge has come up with a line-up of flexible barriers you can trust for your needs at prices not as heavy as most steel variants.

Whether it’s for restricting access or ensuring visitor security at your commercial complex, retail outlet, food stall, warehouse, school, or even your home, Verge has got you covered. Consider getting other type of barriers also to form a barrier system, especially you own a large warehouse.

Contact us at 1800 765 539 or request a quote for your expandable barrier needs and more. We’re experts not just in expandable and other safety barriers, but we can also map out for you a complete barrier system, plus protection for columns, dome mirrors, and more.

If you had any issue with selecting a product, need to negotiate on price or want to ask a question please call our team on 1800 765 539